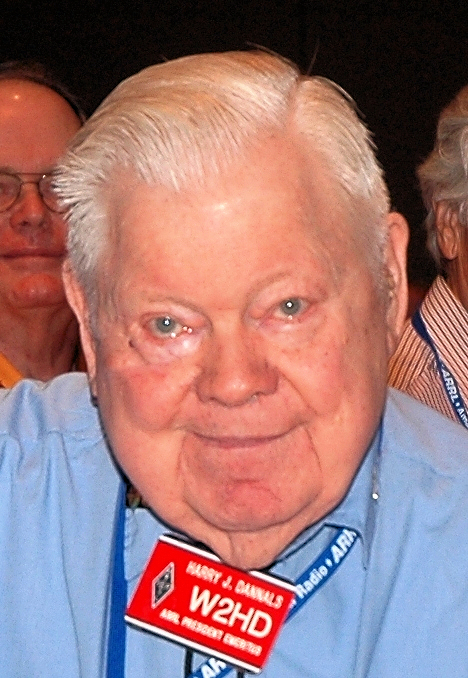 Harry was first licensed in 1946 as W2TUK. He was a member of QCWA
Chapter 155 and Albemarle Amateur Radio Club. A name synonymous with ham
radio for nearly eight decades, was one of four Members elevated to
President Emeritus in 2010. The others elected to this prestigious
position were Leland W. Smith, W5KL, (1989), Lewis ‘Mac’ McCoy, W1ICP
(1996) and Bob Roske, NØUF in 2019.

Dannals served in the Navy where his father (Earl Dannals, W2GG (SK))
was the commanding officer, and was discharged in mid 1941. Harry then
enrolled at Polytechnic Institute of Brooklyn (now Polytechnic Institute
of New York University), majoring in electrical engineering with an
emphasis on electronics. After graduating from college in 1950 he
applied for a direct commission as a naval officer, which resulted in a
new Ensign being added to the ranks. He served several decades as
commanding officer of two highly rated Security Group divisions, an
association with the communications world, ending with his retirement
from the Navy as a full Commander in 1987. During this time he was
employed by the Sperry Corporation where he worked in radar and other
engineering programs for nearly 40 years.

In addition to his work with both the QCWA and ARRL, he is a Fellow in
the Radio Club of America, a member of the Society of Wireless Pioneers,
the Old Old Timers Club and Veteran Wireless Operators Association. In
2002 he was inducted into the CQ Magazine Amateur Radio Hall of Fame.

During his involvement with the ARRL he held many offices at various
levels. As part of the League’s Field Organization, he held appointments
as Official Relay Station (ORS); Official Phone Station (OPS); Official
Observer (00), and Emergency Coordinator (EC). He held elected positions
as Section Communications Manager (SCM), (now Section Manager) (SM)),
Vice Director and Director of the ARRL Hudson Division.

When Harry turned 95 in April, he mentioned that when he was 10 years
old, he learned Morse code with his best friend and was able to master
50 – 60 words per minute. On his 95th birthday he was visited by his
friend, Jim Wilson, K4BAV, and his son, Bob Dannals, W2GG, who holds a
Ph.D. and is a professor in the Johns Hopkins Medicine Department of
Radiology and Radiological Science in Baltimore, Maryland.

“On August 27, 2022, Harry Dannals (W2HD) was visited by his youngest
daughter Mary Dannals-Johnson (from Long Island) and his 2 sons Tom
Dannals (W2TUK, Harry’s old call, from Winston-Salem, NC) and Bob
Dannals, W2GG, (Harry’s father’s old call, from Sparks, MD) at Our Lady
of Peace retirement community in Charlottesville VA. Bob read to his
father the words on the QCWA 75 year anniversary certificate that QCWA
recently presented to Harry. Harry reminisced about old times with his
close friend (regarded as a member of the family), Warren Lueck, W2VKS (SK).

My father had lots of friends, but “Uncle Warren”, as my siblings and I
called him, was one of the closest (as close as his brother, Frank
Dannals. W2DRL). Warren passed in 1997, but I recall Thanksgiving and
Christmas dinners shared between the 2 families each year when I was
going up. It’s interesting that it’s his memory that my dad is now
holding so close as he moves in and out of consciousness. It must have
been a very deep connection.

My dad considered each ham that he met to be a member of his extended
family and cared greatly and fought mightily for all hams in his
administrative roles with the ARRL.

We are all members of the worldwide community that started with Marconi
and continued with Maxim.  It’s a wonderful legacy, and I’m happy to be
part of it.”

“I am writing to inform you that Harry Dannals, W2HD, became a Silent
Key today. An active member for years of the AARC, Harry led a life
devoted to promoting amateur radio, demonstrating the hobby, and helping
people get their licenses.

He served as President of the ARRL for 10 years, longer than anyone else
other than “The Old Man” Hiram Percy Maxim, founder of the League. He
also served as President for two terms of the Quarter Century Wireless
Association.  At his death, Harry was President Emeritus of both
organizations.

I do not have information about when his service will be. As soon as I
know I will pass that along.”